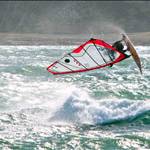 Hey frothers, anyone got any feedback on these rear wings?

Currently have 920 front and 500 rear on Std fuse. Sometimes use 720 front.
I would like to increase the speed range a bit and slightly better turning.
Wing foiling mostly these days now, but do like the odd sup foil session in the waves and want to try a few downwind soon.
Likely get a HA front in the future.

Should I just get the 460 for less drag? But the 390 with downward tips looks interesting and the description says good for winging?
Or just cut my 500 down to say 400, and get one new wing. But which one?!
Cheers for any feedback in advance ?? H 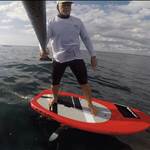 That's a tough one, I have all 3 of those rear wings and I'm not really sure what to recommend
They will both give you more speed and better turning than the 500 and I'm sure most will say the 460.

The 460 would have the least drag which would give you (and handle) the highest speeds.
However, it is a bit twitchy/skatey at first but you do get used to it pretty quick.

I did enjoy the extra little bit of stability and different turn characteristics of the 390 though when cruising around on the wing trying to master tacks and foot changes.
What I have noticed though is at high speed when fanging down some big swells downwinding it can do some funny things at times and become a bit harder to control, then I prefer the 460.

I have been using the 460 mainly when surfing but yesterday I had a big 2 1/2 SUP surf session and for the first 1 1/2 hours I had the 1000 front and 390 rear.
Then I changed to the 460 and the first couple of waves felt weird to turn and I found it seemed harder to get it up and foiling.
Within a few waves it felt fine though.

So basically I don't know what to recommend but they will both be an improvement and you will get used to either one.
Meanwhile, I will keep changing back and forwards, it might be better if I didn't have a choice.

Thanks for the feedback fellas.
Interesting thought about the 390 less likely to puncture your wing
H

Select to expand quote
hanza1111 said..
Thanks for the feedback fellas.
Interesting thought about the 390 less likely to puncture your wing
H

I hadn't thought about the puncturing your wing aspect but as quite a few will know that is a very real advantage.
Mind you I think the front wing is the main hazard.

Just a thought on my previous comment about the 390 doing a few funny things at high speed on downwinders, that was in the ocean during some fairly stormy conditions and for all I know it could have been due to weed.

I need to spend more time on both wings to get a real feel for the differences.

I am a prone foiler so i'm not sure if this applies, but i have cut down the 500 to about 380-400. it feels faster and turns easier. Though less stable. Save the money for a new front wing, that's where i think you will really notice the biggest impact.

I use to Foil with surf sup & wing. If you can go for short fuse for Winging it will change(ultra short surf & Sup)Otherwise agree with tobiwankenobi cut the 500 to 390. I did. you loose early lift and need to pump more but you have more speed and versatility.