Stingersup said..
These are some pics of my 1600 setup. I did it originally for the 1300, but found it works really well with this foil as well. The last pic shows the shim washer. I'll get round to making a proper shim one day. 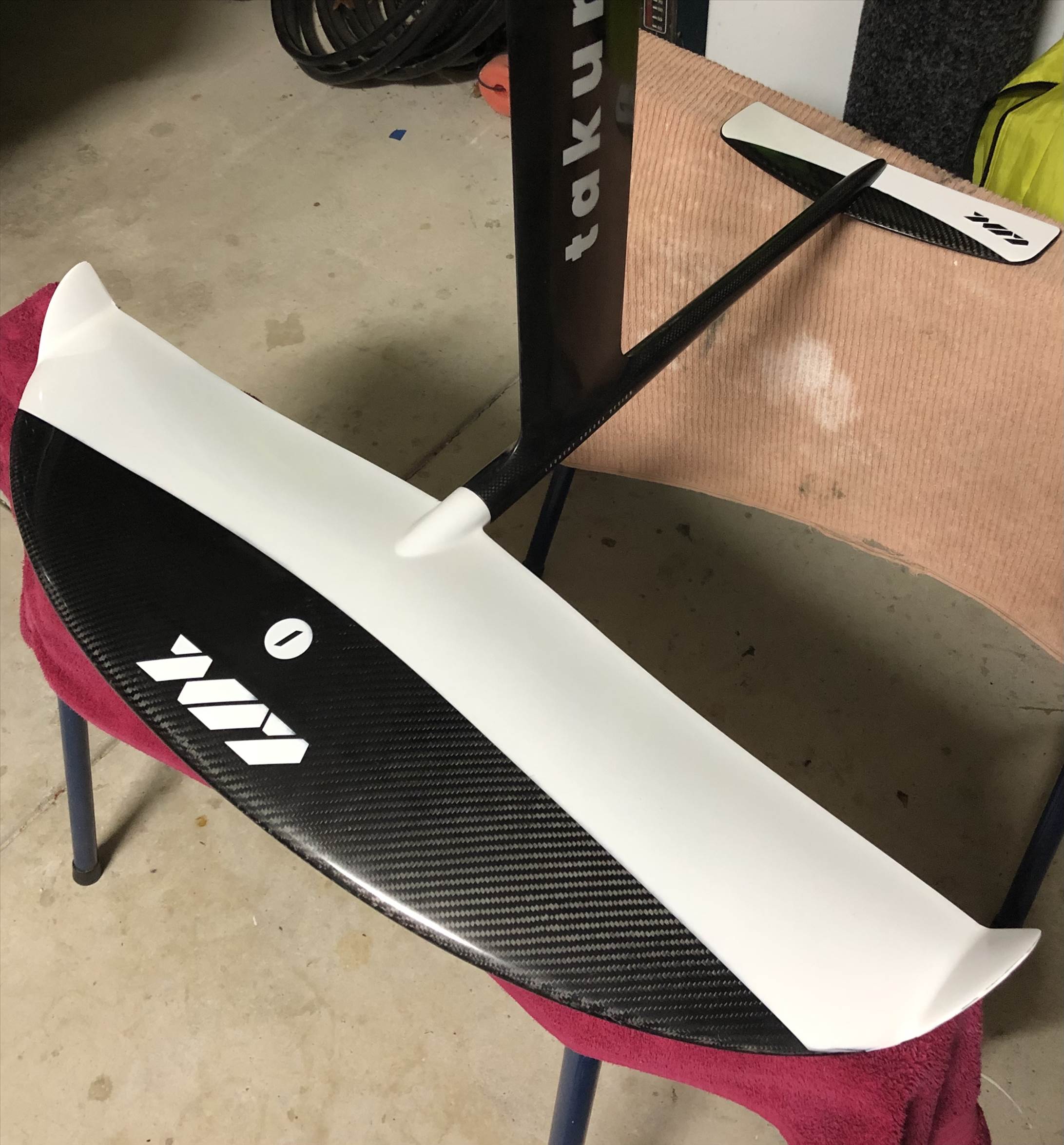 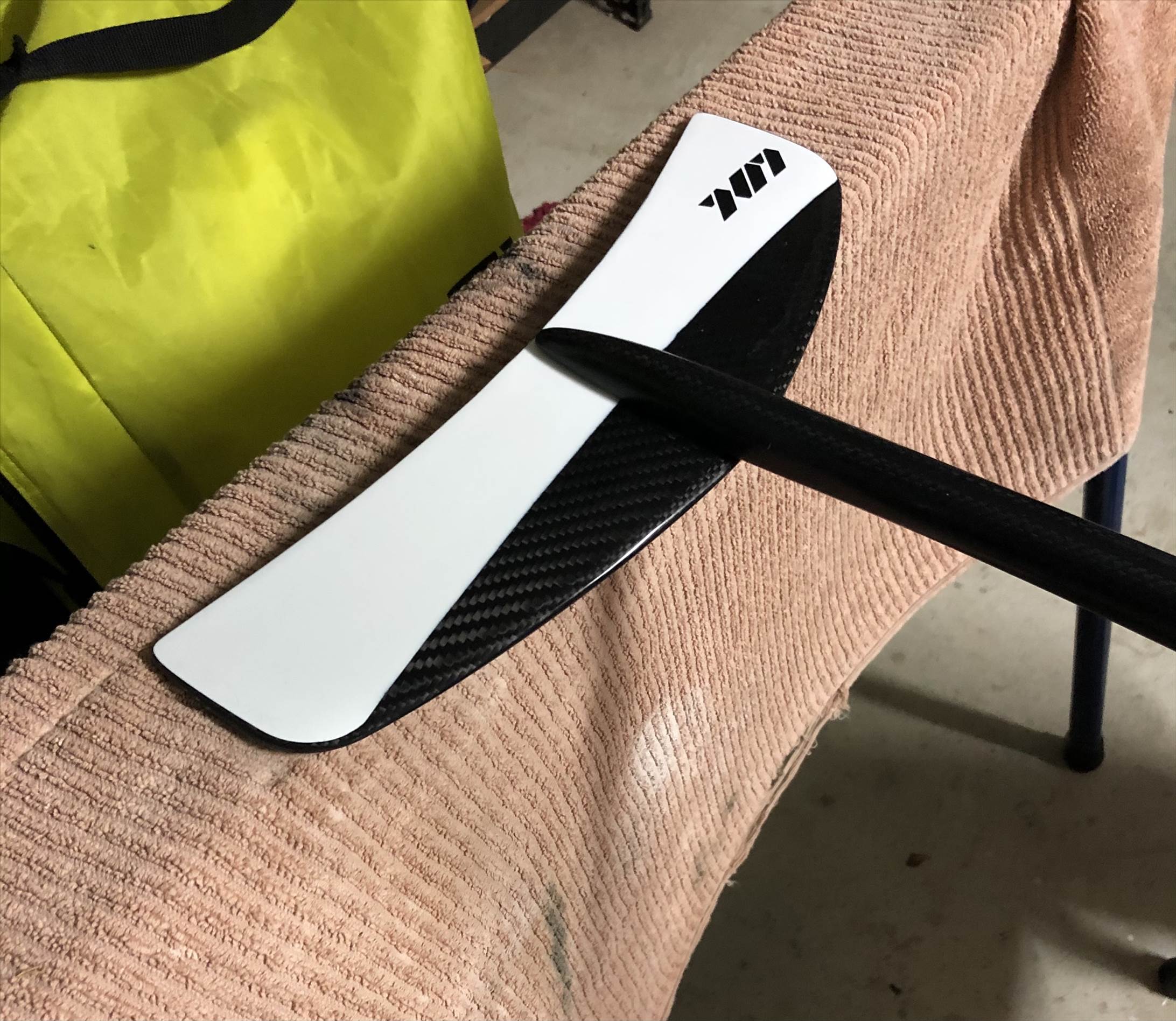 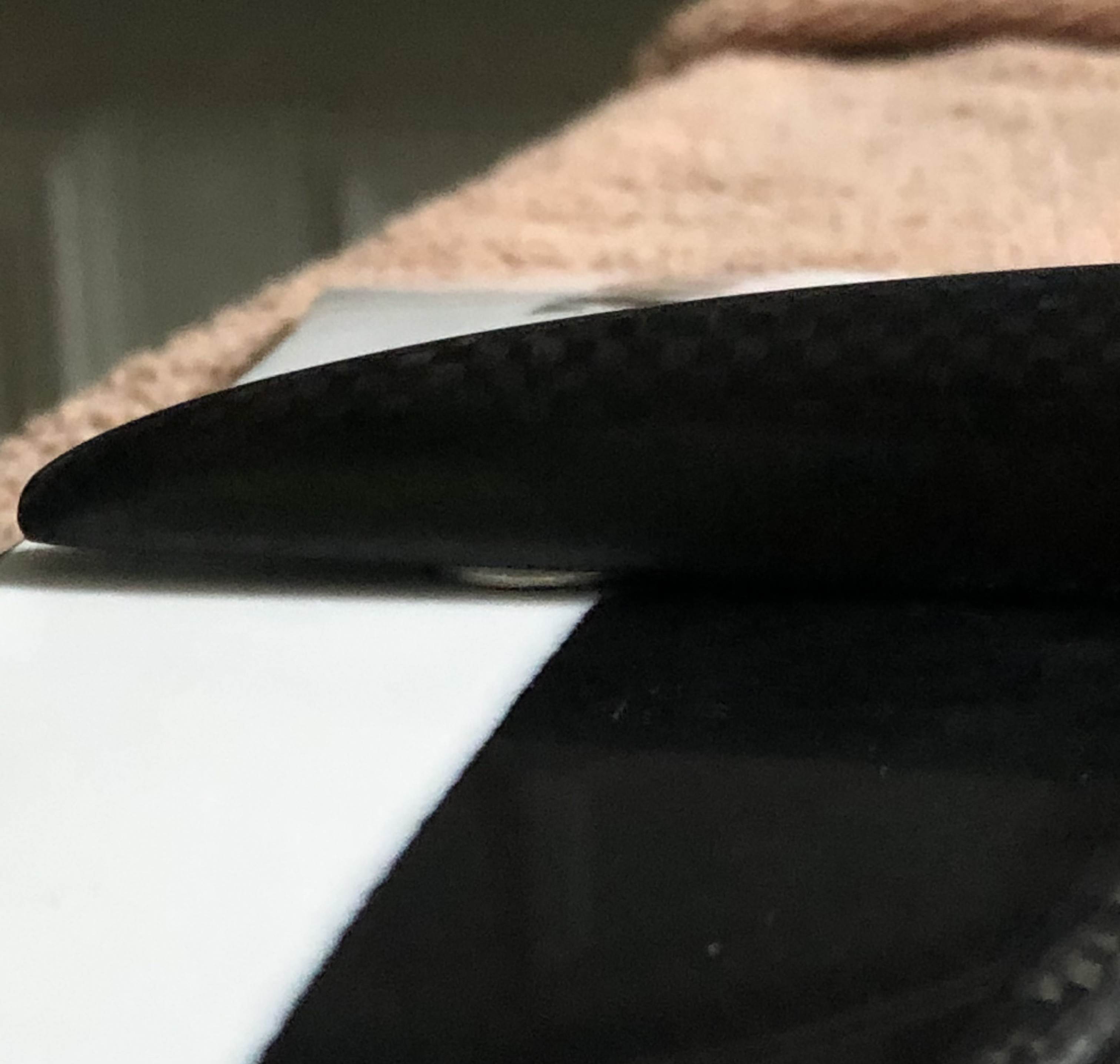 was this the large tail wing ??
what length did you cut it to ?? 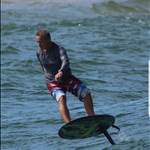 
kobo said..
It milks the small stuff well, but I was expecting you to pump all the way back out and do it again Haha


Noticed it popped up pretty quick on the takeoff, is that all part of the front foot nature of it ? Or is it just me looking for things wrong with it cause I don't have one.haha

Haha, the lift on takeoff is fine mate, that was just me pumping as soon as I popped up. The waves were that gutless that I had to create some speed to get going - almost breached under the pressure of my daughter filming

Had quite a few instances now where I've gone the full breach on a sketchy take off & somehow ridden out of it - hav'nt managed to do this before...I think this is purely a Kujira thing, I'm not riding any differently & only thing changed is getting a new foil

Some tow footage of the 980, first video was 43kph according to the GoPro GPS.

Select to expand quote
BrendanGalway said..
Some tow footage of the 980, first video was 43kph according to the GoPro GPS.

I'm on axis gear-mostly the 900. Happy some days/conditions-sometimes not so much. I'm soooo tempted to jump on the Kujira 980.Hard to believe something that small would work, but by all accounts- sounds it may be the closest thing to an all-a rounder- prone surf/ pump wing there is for my 90kg. Only thing holding me back is jumping ship before the new surf wings axis has on the way and/or the coming soon Lift mid-aspects. All the coming attractions/options are dizzying. ??

Yes the new Axis 81 looks pretty nice and around the same size of the Kujira 980 . Soon as one comes in I'll compare it .

I enjoyed your recent appearance on the progression project Piros. I'm trying to hold off and see what the new wings are, but man is that kujira tempting. Good thing it's so expensive that I can hold off. Plus I'm not in love with one piece fuse/mast as I just drive a small car and have 4 boards in it at the moment.

Select to expand quote
Piros said..
Yes the new Axis 81 looks pretty nice and around the same size of the Kujira 980 . Soon as one comes in I'll compare it .

I'm loving the performance of the Kujira 980 but nothings perfect, few things that I think arn't that great.

1), Very sharp wings & back of carbon mast, I've sanded mine after a few good cuts.
2), One peice mast/fuse (carbon), not that great if you travel but there is an aluminum option.
3), No wing covers supplied with the full carbon setup, there is a case for the wings & cover for mast/fuse but you need to disassemble.

Would I buy one again?

Yeah I agree they are really sharp , I have a few nicks and cuts over my legs from foiling every day over the break . They come with a really nice bag but no wings covers , which is crazy considering how fine the the wing tips are . I'm using my Axis covers

The new Takuma Ali mast is stiffer than the carbon . I have the 85cm Ali for the ding and that's what I'll travel with for proning & dinging . If we ever get to fly again ??

I also have Kane de Wilde custom 13.5" tails coming for both the Kujira & Axis so this will be a great test. 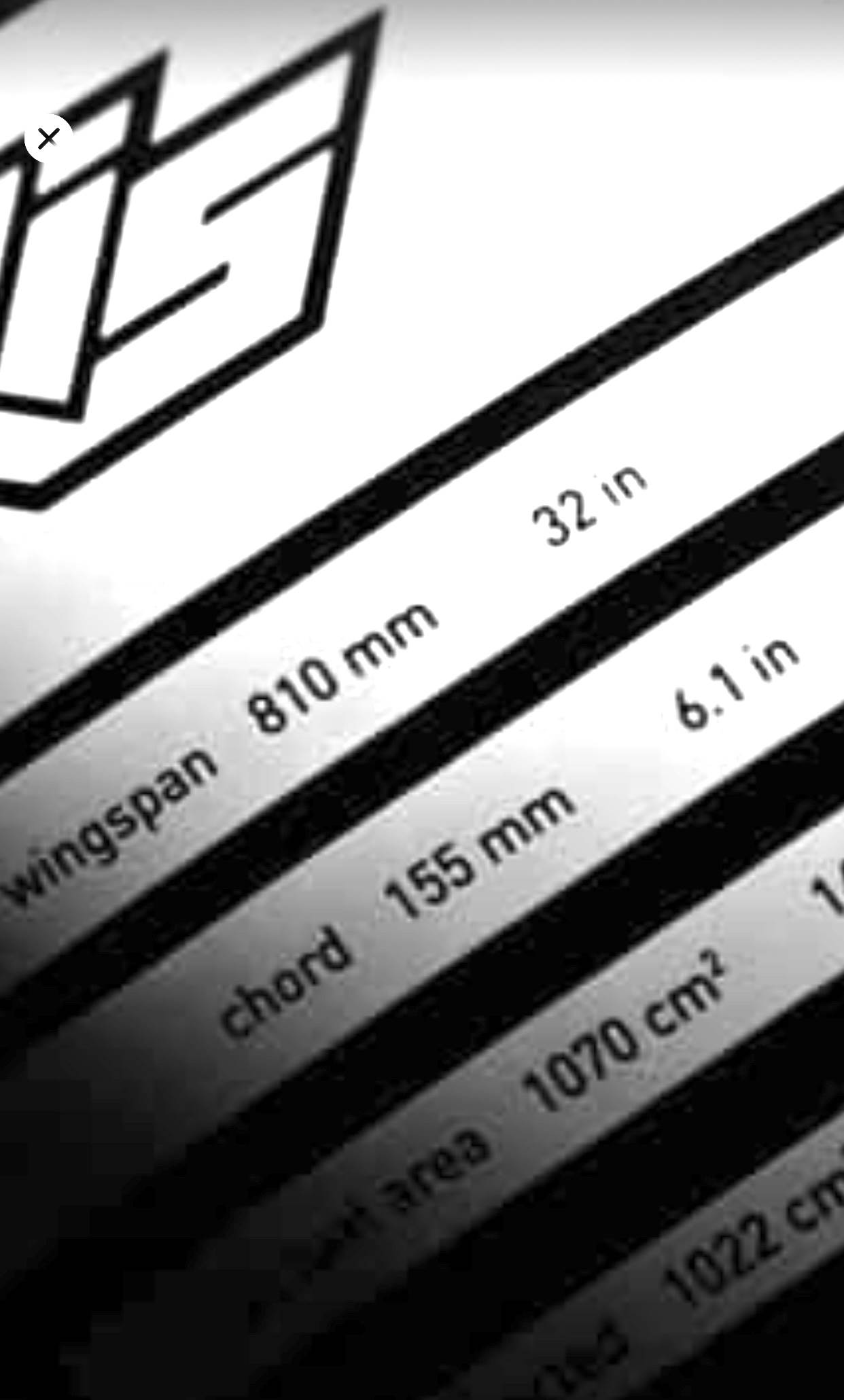 Everyone is drinking the Kujira Kool aid ! haha

Another fun session on the 980 towing in at the Southport Seaway this morning , pretty messy but still fun , caution bit of swearing

The 980 was still too boosty in these conditions hopefully get the 720 next week .

That ocean is nearly as rough as your head Piros haha , 980 too much lift.....bit much to expect one wing for all conditions I guess.

Select to expand quote
kobo said..
That ocean is nearly as rough as your head Piros haha , 980 too much lift.....bit much to expect one wing for all conditions I guess.

yeah pretty nasty , went out again today even worse but wind backed off fir a bit . So serious size today and really king runs. The Ali mast makes a huge difference virtually no flex or twist .

Select to expand quote
The Ali mast makes a huge difference virtually no flex or twist .

You finding you like the Ali w/ the longer 85 mast for towing or do you prefer it w/ the 75 for paddle in prone as well?

The Ali mast feels really good , so much stiffer and no twisting at the fuse . It's helped us towing so much plus the ding , haven't prone surfed yet but I will, I only have the 85 Ali but might get a 75 for the prone

I can imagine w/ the longer/85 mast and blazing speeds you were getting towing into that fast moving energy- it'd make a huge difference.

Never towed in for foil... which I'd like to change... but myself being accustomed to prone on the stiff axis mast... I'd maybe adapt the changeover easier on the Ali. (ps: first time in my life... I find myself wanting a jetski- or better yet... talking a friend into one)

It's a really interesting subject, Colas had a good explanation on it earlier, with the bumps having higher angles off attack promoting controlled stalling first ,but not in the valleys ,allowing maintaining control.
I wonder about the designs of wings without tubercles, what factors determine how they behave ?

Select to expand quote
kobo said..
It's a really interesting subject, Colas had a good explanation on it earlier, with the bumps having higher angles off attack promoting controlled stalling first ,but not in the valleys ,allowing maintaining control.
I wonder about the designs of wings without tubercles, what factors determine how they behave ?

Yeah good question and as I mentioned above the new Axis 810 coming out is dam close to the Kujira 980 specs . This will be the wing to compare without the tuberclesIt's ( bumps) 90cm2 more so it should come close. Can't get it yet but the new 890 Axis is only days away and that will be a good guide .

Select to expand quote
kobo said..
It's a really interesting subject, Colas had a good explanation on it earlier, with the bumps having higher angles off attack promoting controlled stalling first ,but not in the valleys ,allowing maintaining control.
I wonder about the designs of wings without tubercles, what factors determine how they behave ?

I would have thought it is the other way round?
The valleys create a thinner,less curved Leading edge and foil section and they stall earlier, no?.
Maybe i am brainfarting :)

Also the channeling effect of the "valleys" acting like fences and slowing or stopping full ventilation.

It seems to work really,really well anyway.Plus it turns an glides...

I have to admit that when the Kujira came out i thought it was eye candy but the Takuma guys have hit two consecutive balls out of the park with the LOL (which i happily own) and now the Kujira.
Please Register, or Login first...