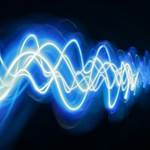 Select to expand quote
baddog said..
Baffled by the video. The 12'6" shown has a very narrow tail. Is the wide tail only on the 14'?

I'm wondering if the 12-6 has been kept more like it was because it had quite a cult following for its surfability. And if you were beach racing a 12-6 then that's what you'd need. Rounder rails and bigger arse aren't likely to make the new 14 a better surfer, even if they improve DW and general ocean paddling. 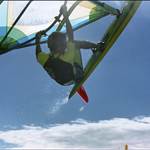 Bowerboy, thanks for posting the comparison with your previous v2. I am wondering if you could make any comparison of the 2020 Bullet 14 with the SIC F16. It seems like the new Bullet would be closer to the F16 in terms of stability, bump catching, and speed. I would love to hear any thoughts or comparisons.
Thanks. 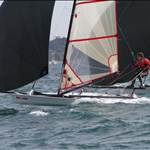 Select to expand quote
obijohn said..
Bowerboy, thanks for posting the comparison with your previous v2. I am wondering if you could make any comparison of the 2020 Bullet 14 with the SIC F16. It seems like the new Bullet would be closer to the F16 in terms of stability, bump catching, and speed. I would love to hear any thoughts or comparisons.
Thanks.

which model F16 are you talking about?

The F16 I was talking about is the last production version, which I think was v2.

The conditions were pretty rough with backwash off headlands. We were doing out and backs around a pole. The first thing I noticed was that the bullet is much looser than the RS. I attribute this to the rounded rails running up to the back of the board, and the rounded sides. The RS has very straight rails and straight sides. This coupled with the wide tail and the 8 inch fin supplied makes the RS track. The bullet with the 7 inch fin, the rocker, pin tail and rounded rails was definitely looser, and had more side to side roll.

Upwind the bullet was very nice. When I have paddled the v2 in similar conditions I have really felt the board push against the chop, slowing me down and requiring quite an effort to keep momentum. The new bullet has a much more skaty feel, gliding up over the chop and easier to keep moving. Relative to my buddies I was not slower than when I am on my RS. This surprised me.

We did some flatwater wolf pack, congo line stuff to finish training. The new bullet was comfortable washriding and I could comfortably reach the front when it was my turn to sprint. Again relative to my buddies the new bullet on the flat had nice glide and kept up easily.

I was expecting the new bullet to be great downwind and it is. I have been surprised at how it performs in chop and on the flat. I have only had one training session on it but it felt comfortable and has a nice gliding sensation. It definitely seems to glide more over the surface whereas the older v2 seemed to push the water. 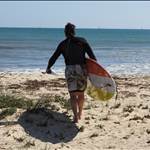 Why am I looking for "Add to cart"?
Please Register, or Login first...